Back To The Future - Whither Victory?

Now that we are bombing Iraq again, this time at the invitation of its government, has anyone in authority yet come up with a definition of "victory"?

In other news, it seems that Islamic State militants are six miles from Baghdad.
Posted by Ken Frost at 10:00 AM No comments:

Whilst the appointment of Haidar al-Abadi as replacement Prime Minister to Nuri al-Maliki (if the appointment actually sticks) may placate the Americans, it remains to be seen if the man is able to bring back Iraq from the brink of partition.

History is not on his side.
Posted by Ken Frost at 10:04 AM No comments:

The US is continuing with air and drone strikes against ISIS in Iraq, and Obama has warned that this will take some time.

Thus we have come full circle, having knocked over a regime and destabilised a country without any plan for post conflict stabilisation, the only other option that can be applied is an ongoing military operation in the futile hope that something will "come along" and fix this mess.

Mission accomplished!
Posted by Ken Frost at 10:40 AM No comments:

Back To The Future

The US appears to be bombing artillery it paid for after it was abandoned to the enemy by troops the US paid to train.
Posted by Ken Frost at 6:14 PM No comments:

Over 5,000 Civilians Killed This Year


Lest the world be distracted by Ukraine and Gaza, it should also be remembered that Iraq is falling apart.

Reuters reports that the UN has stated that at least 5,576 Iraqi civilians have been killed this year in violence.

Additionally, at least 11,665 have been wounded since January. 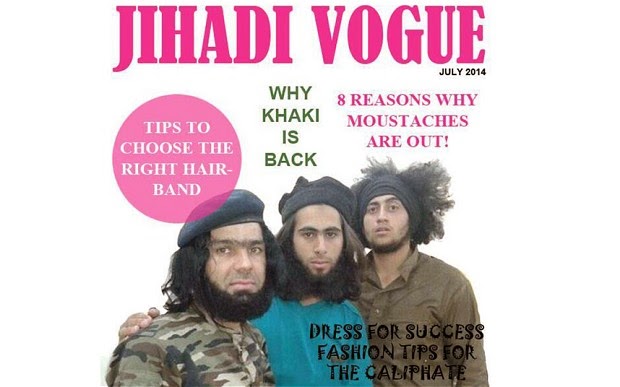 It seems that the declaration of a Caliphate has not impressed everyone in the real world.
Posted by Ken Frost at 10:06 AM No comments:

According to the Telegraph Islamic State jihadists are raising as much as $1M a day from the sale of crude oil recovered from conquered oilfields in Iraq that is then smuggled on to Turkey and Iran.
Posted by Ken Frost at 10:38 AM No comments:

Allegedly, according to Iraq, Sunni insurgents have taken control of nuclear materials being kept for scientific research purposes at a university in Mosul city.

Mohamed Ali Alhakim, Iraq’s ambassador to the UN, told Ban Ki-moon, in a letter dated July 8, that almost 88lb of uranium compounds had been removed from the university.

The letter is quoted by the Telegraph:

“Terrorist groups have seized control of nuclear material at the sites that came out of the control of the state.”

Before people rush to their fallout shelters, it should be noted that it is in the Iraqi government's interests to overstate the danger in order to garner international support (in the form of weapons and boots on the ground). Thusfar it is considered that the materials stolen would be difficult to turn into a bomb, and that they are not enriched uranium.

Abu Bakr al-Baghdad, self proclaimed Caliph of the so called Islamic State, has caused a bit of a stir by besporting a designer watch (estimated value £3.5K) during his recent TV appearance.

Evidently he is need of a spin doctor, in addition to those medical doctors that asked to come to his new state.
Posted by Ken Frost at 11:02 AM No comments:

Islamist militant group Isis has said it is establishing a caliphate, or Islamic state, on the territories it controls in Iraq and Syria.

It also proclaimed the group's leader, Abu Bakr al-Baghdadi, as caliph and "leader for Muslims everywhere".

Let's see how long that lasts then!
Posted by Ken Frost at 10:05 AM No comments:

Kerry Warns Nations To Stay Out of Iraq

As Syrian warplanes have apparently bombed Sunni militants’ positions inside Iraq, US secretary of state John Kerry has warned that other nations should stay out lest the situation get out of control.

Who says Americans don't do irony?
Posted by Ken Frost at 11:09 AM No comments:

As I noted on Monday, Iraq is fracturing. Diplomats and others in positions of authority now admit that Iraq is facing imminent break up.

A Western diplomat has told The Telegraph:


"We have used the word crisis about Iraq before, but this is the real thing.

There is no doubt about the scale of the threat that it poses to Iraq's continued existence as a state, and it is also a threat to the wider region too."

This is the consequence of enforced regime change without there being a viable post regime plan for stabilisation and rebuilding.
Posted by Ken Frost at 9:59 AM No comments:

It appears, as ISIS seize Iraq's Western border crossings, that Iraq is fracturing.

This should hardly come as a surprise given that the only way it was held together before was by a dictator who used the tools of the state to suppress dissent.

The only real surprise is that those who removed Saddam are surprised by the fracturing of Iraq.
Posted by Ken Frost at 10:51 AM No comments:

US To Send 300 Military Advisers

President Barack Obama has said that the US will send 300 military advisers to Iraq to help fight Islamist-led insurgents.

Mr Obama said (as per the BBC) the US was prepared for "targeted and precise military action, if and when" required, but added that US troops would not fight in Iraq.

Iraq Asks For US Air Strikes

Iraq has asked for US air strikes against advancing jihadist militants, who have seized key cities and towns.

Apparently, President Barack Obama has told Congressional leaders he does not need thier approval for any action in Iraq.
Posted by Ken Frost at 10:55 AM No comments:

It would appear, if reports in the media are true, that remnants of Saddam's regime are trying to make a comeback in at least the city of Tal Afar.

What was it Bush once said?


"Mission Accomplished!"
Posted by Ken Frost at 10:00 AM No comments:

The Clusterfuck That Is Iraq

What did Blair and Bush really think would happen when they kicked out Saddam without a coherent and robust plan for restoring Iraq politically and economically after the war?
Posted by Ken Frost at 10:11 AM No comments: