The Belgians are having something of a debate about artistic freedom of speech.

David Cerny is one of the country's most original and provocative visual artists.

His work includes giant black babies that crawl up Prague's Zizkov TV tower, and the Pink Tank a memorial to the liberation of Czechoslovakia in 1945.

However his latest work, "Shark", is causing hackles to rise.

"Shark" is a sculpture of a life-size Saddam Hussein in underpants with his hands tied behind his back, floating in a large glass tank filled with the embalming fluid formaldehyde. 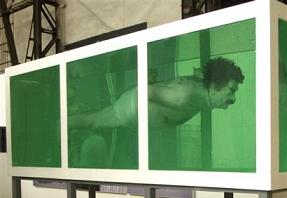 The sculpture was supposed to be exhibited as part of this April's Beaufort 2006 Modern Arts Festival, in the Belgian town of Middelkerke.

However, Michel Landuyt the mayor of Middelkerke has banned it. He claims that it's far too provocative.

Isn't that the point of "cutting edge" art?

He is basing his decision on the furore over the Danish cartoons.

Landuyt told Radio Prague there are several reasons why the sculpture is inappropriate:

"Families with children pass by the square that it was to stand on and some of them may not have taken it too well.

The other thing that bothers me is that the exhibit portrays an almost deformed human being, a real person, who is still alive.

He is in trial but should be presumed innocent until proven guilty. And lastly, I don't want to provoke people... or a certain group of people."

Good art is provocative and thought provoking, the bland chocolate box art beloved of dictators and the repressed does nothing for society.

David Cerny decided to make the sculpture of Saddam Hussein, after he witnessed the aftermath of the Iraqi dictator's reign during a week-long stay in Baghdad.

He is quoted as saying:

"I don't think that a wave of censorship has hit us but what is worrying is that it is now affecting the everyday lives of the ordinary citizens of this continent."

The sculpture will most likely be exhibited at the Museum of Modern Art, in the nearby city of Oostende.
Posted by Ken Frost at 10:45 AM No comments:

Andrew Lindberg the MD of the Australian firm, AWB, which is accused of paying bribes to the former Iraqi regime has resigned (effective April).

An inquiry is currently investigating claims that AWB paid over $200M to Saddam Hussein's regime, as part of the UN oil-for-food programme.

AWB denies any wrongdoing, but an earlier investigation by the UN said it should have known the money was going into the pockets of Iraqi ministers.

The allegations have provoked further allegations in Australia, that the government knew about the kickbacks; they have denied this.
Posted by Ken Frost at 10:47 AM No comments:

Saddam Hussein's defence team, never shy of grandstanding, have declared that in their view the trial is fixed.

They have issued a statement saying that they have all but given up in participating in his trial, and claim that the United States and Iraq's Shiite leaders have fixed the proceedings; they urge the court-appointed defence lawyers to quit.
Posted by Ken Frost at 11:24 AM No comments:

It is strange how men of blood seek to depict themselves as artistic and sensitive creatures. Hitler claimed to be a painter and an architect, Stalin enjoyed a night at the opera; now Saddam Hussein has taken to writing poetry.

His lawyers, doubtless trying to play to the court of media opinion, published one of Saddam's poems the other day.

Here is a translation:

My heart is still with me as my enemies will not be able to exile it.

And the handcuffs will not prevent my prayers from being heard.

Who said that the west have approached the holy Arab land with good intentions?

Who said that water could drive a wise man drunk?

Who said that an animal could protect the virginity of a woman?

Who handcuffs a lion will be the leader, even if he was originally nothing but a bastard.

I warn you of the loss of a civilisation and dignity by the hands of traders.

My body is still firm and will not soften, and the blood of the great nobles is still moving in my veins.

Beloved Iraq is the crown of the hearts and the title of the greatest poems.

Oh Iraqi send my regards to the children who lost their toys under the rubble caused by oppression.

Send my regards to the women whom their dresses were torn by betrayal.

Send my regards to the resistor who is wearing the dress of pride and the spirit of a martyr.

Oh Iraq send my regards to every inch of your surviving land.

I'm afraid that it does nothing for me, with regard to "rubble cuased by oppression" Saddam should remember the old phrase about the pot calling the kettle black.
Posted by Ken Frost at 11:17 AM No comments:

In the book he claims that there were really WMD in Iraq, and that Saddam moved them in civilian aircraft to Syria before the US invasion.

The planes made 56 flights to Syria in the weeks leading up to the war.

"Saddam realised, this time, the Americans are coming. They handed over the weapons of mass destruction to the Syrians."

That being the case, why didn't Saddam use these weapons to defend Iraq against the invasion?

Isn't that the whole point of having WMD?
Posted by Ken Frost at 11:40 AM No comments:

Khalil Dulaimi, the chief defence lawyer for Saddam Hussein, claims that he has been denied access to his client for the first time in more than a year.

Dulaimi says that the US military authorities turned down his request to see Saddam, without giving any reason.

Preventing the visits is illegal and prevents the president from having a fair trial."
Posted by Ken Frost at 10:44 AM No comments:

Email ThisBlogThis!Share to TwitterShare to FacebookShare to Pinterest
Labels: USA
Newer Posts Older Posts Home
Subscribe to: Posts (Atom)
www.saddamstrial.net followed the trial of Saddam Hussein, former dictator of Iraq, and continues to follow the fallout in the Middle East from the regime change in Iraq.